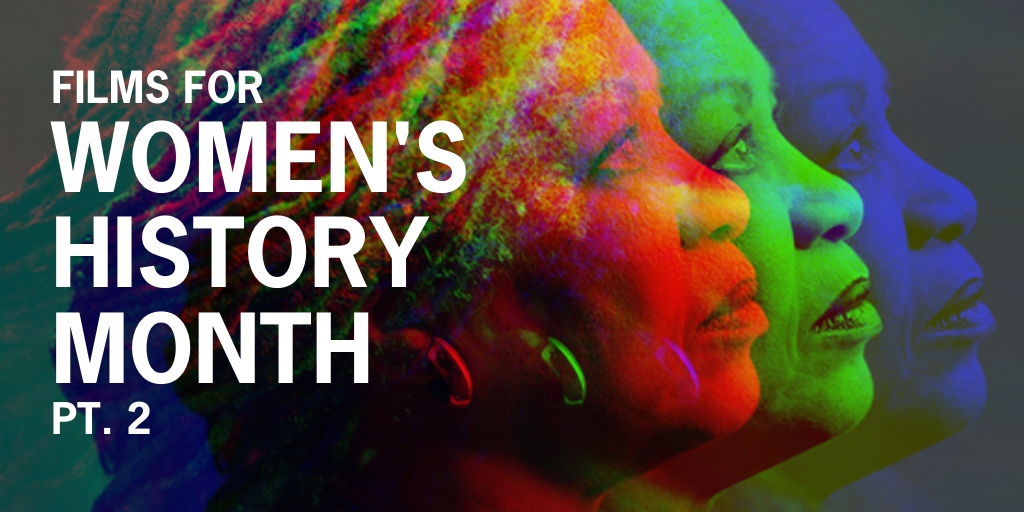 Bold and unforgettable describe the incredible women highlighted in this list of films, whose life stories continue to inspire and invigorate the next generation of creatives, activists, and leaders.

Toni Morrison: The Pieces I Am

She was born as Chloe Wofford in Lorain, Ohio, in 1931; 62 years later, Toni Morrison was in Stockholm, Sweden, receiving the Nobel Prize in Literature. The journey the celebrated author traveled in the years between and following is the subject of Timothy Greenfield-Sanders’s Toni Morrison: The Pieces I Am. From her time as a student and professor at Howard University, through her editing at Random House, to her own inimitable and influential writing career, the author’s remarkable personal history is told by Morrison herself, in intimate and candid interviews, as well as via recollections and impressions from colleagues and contemporaries such as Angela Davis, Walter Mosley, and Oprah Winfrey. Myriad accolades, including the Pulitzer Prize and Presidential Medal of Freedom, are all the more impressive when viewed through the lens of Morrison’s spirited responses to adversity and acclaim, both of which she’s experienced in abundance. With this deft and stirring transition from page to screen, the author shares another inspired and inspiring story—her own.

When Molly Ivins was still a relatively inexperienced reporter, she walked into a job interview at the Texas Observer, the only liberal publication in the state, with a six-pack of beer—for herself. It’s a funny yet revealing story, shared with delight in RAISE HELL by one of her former colleagues. Before her death in 2007, Ivins became one of the country’s most celebrated political writers and was a three-time finalist for the Pulitzer Prize. At one point, her syndicated column—loved and despised equally by readers—ran in nearly 350 newspapers. Both in print and in person, Ivins was authentic, outspoken, and riotously funny—as long as you weren’t the one being skewered by her sharp-witted one-liners, which defrocked countless politicians on both sides of the aisle. RAISE HELL explores the roots of Ivins’s unique voice using interviews, a lively soundtrack, and a generous dose of archival footage featuring Ivins at her best. It’s a wistful reminder of the pleasures of free speech.

On the heels of three albums yielding hit singles, the legendary singer Aretha Franklin turns to her spiritual upbringing, electing to create her next compilation with gospel music. Resurrected footage from 1972 captures Franklin’s electrifying performance with Reverend James Cleveland and the Southern California Community Choir for the live, hair-raising recording of the late singer’s Amazing Grace, one of the best-selling gospel records of all time. The footage transcends the decades that have passed since its filming, transporting the viewer into the pews of the New Temple Missionary Baptist Church in Watts, Los Angeles, where Franklin performed over two mesmerizing evenings. Franklin’s fervent voice soars and fills the room, imbuing the crowd with an energy to match her own. She is undoubtedly a seminal figure in music, and Franklin’s essence and skill are preserved here in measured and patient takes, encapsulating a phenomenal artist for all to experience.

Famed sex therapist Dr. Ruth Westheimer changed the conversation around intimacy with her frank and exuberant advice. Ask Dr. Ruth charts her meteoric rise and reveals how her incredible life shaped a profound desire to help people find pleasure. Director Ryan White follows Westheimer as she traverses the globe. At 90 years old, she still has a calendar packed with speaking engagements, and their enjoyable rapport leads to moments of both humor and poignant reflection. Beautiful animation captures memories from her childhood and the tremendous loss she experienced as a young girl—she was separated from her parents during the Holocaust and never saw them again. Her recollections eventually lead us through the milestones of her life, including her own love stories, her journey to America, her career before she became a household name, and her role as a mother and grandmother. Throughout, excerpts from Westheimer’s vivid career in television and radio remind us of the ways these personal experiences influenced her public identity and still-unfolding legacy.

Knock Down the House

In the run up to the 2018 U.S. midterms, four political newcomers challenge their Democratic incumbents in the primary elections that lead ultimately to a seat in Congress. Fearless and determined, Alexandria Ocasio-Cortez, Paula Jean Swearengin, Cori Bush, and Amy Vilela introduce their grassroots platforms to the communities in which they are deeply ingrained. The bartender, environmental activist, pastor, and business leader are well acquainted with the throes of everyday working-class Americans. Tender testimonies from candidate to camera form vibrant profiles of the people running and balance the pulsing thrill of campaign excursions. As Ocasio-Cortez’s success predates this story, the film naturally focuses on her imminent victory, with the intersecting ancillary stories depicting the greater political movement. Whether the candidates win or lose, the congressional campaigns featured in Knock Down the Houseare an inspiring rallying call for new voices to upend the status quo.

Whether inspired by or opposed to her interpretation of the law, public fascination with U.S. Supreme Court Justice Ruth Bader Ginsburg has made the “Notorious RBG” a household name. However, characterizations are in the eye of the beholder and are deeply polarized: some see her as a cunning adversary, while others describe her as a real-life superhero. Regardless of vantage point, what is undeniable is the significant change brought about by her tireless efforts to champion the rights of women.

Directors Julie Cohen and Betsy West’s film is as dynamic as its subject; it invites the 84-year-old Ginsburg to revisit pivotal moments in her life and law career, reflecting on decades of landmark cases and decisions. Footage from her 1993 Supreme Court confirmation hearing and recordings of her arguments are woven with present-day interviews, highlighting her vital work with the ACLU Women’s Rights Project and her experience on the U.S. Court of Appeals. The comprehensive documentary also analyses her role on the Supreme Court, complete with discussions of her searing dissenting opinions.

While the film celebrates the immense accomplishments of Justice Ginsburg, it also allows us to see Ruth, the woman, wife, mother, and grandmother, equally devoted to her work and to her family. The film beautifully captures her love affair with her husband, Marty, who was responsible for encouraging her to pursue law in the first place and continued to champion her career. With wit, candor, and captivating intimacy, including stories from those who know her best and in-depth interviews with the woman herself, RBG is a rare portrait of a cultural icon and her still-unfolding legacy.