Join us for a conversation with contemporary Black filmmakers on how they are moving the documentary form forward using new approaches, cinematic languages, and theory in their recent work. In partnership with the Department of African & African American Studies at Duke University, this conversation is a part of Black Frame, a series of discussions, curriculum, and presentations with a focus solely on Black documentary filmmakers and their work.

What are the implications and special challenges that festivals face when trying to vet films that might spark controversy in terms of authorship and consent? Join us in collaboration with Working Films for a discussion about the role that film festivals can play in increasing ethics and accountability in the documentary field. Working Films’ StoryShift Strategist Natalie Bullock Brown will moderate this discussion with representatives from the documentary filmmaking and film festival community. Don’t miss this important and timely conversation.

Throughout history, documentary film has been used to bring to light the abuses that human beings can inflict upon one another, whether during war, genocide, imprisonment, or via policies that force people into desperate conditions, such as exile, migration and/or starvation. Such work can and has brought public awareness to circumstances that bring about changes in laws, policing, public opinion, and inspire cultural norms to shift. How do documentary filmmakers walk the fine line of exposing abuse and not exploiting victims? What is appropriate to portray and what crosses the line? This group of esteemed Full Frame colleagues discuss their work, the work of the field, and how today’s image-heavy culture impacts the work of documentarians.

As more festivals make the move online, documentary directors are left questioning, what is the right path for their films? Join us for a discussion on emerging strategies for nonfiction filmmakers, where we’ll tackle the most pressing concerns and questions about the changing festival landscape. 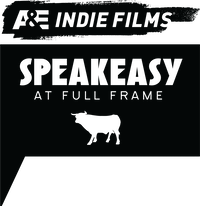 The Speakeasy offers a casual setting where a small audience can listen to industry leaders take on topics that are at the heart of the documentary community today.

The A&E IndieFilms Speakeasy feature spirited and engaging discussions and debates between professionals working at the highest levels, both on stage and with the audience. This not-to-be missed series of conversations takes place on Friday and Saturday in the lobby of the Durham Hotel.

A wide array of topics related to documentary film and filmmaking have been tackled since the program’s inception. To watch and learn more about previous conversations, please visit the A&E IndieFilmsSpeakeasy Archive.