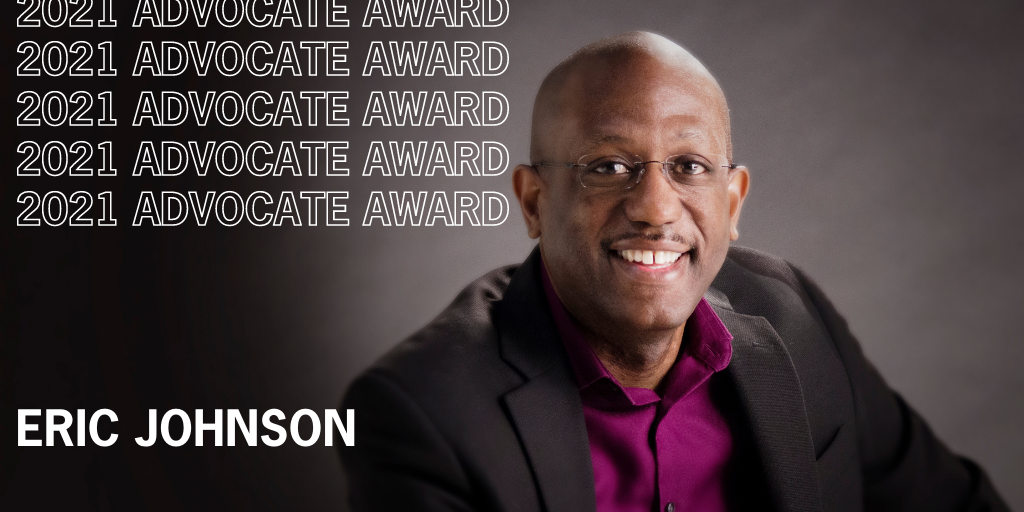 Keeping a film festival running smoothly while sustaining mission and groundedness are tall orders, impossible to achieve without many friends. Which is why Full Frame’s connections to the regional filmmaking community have always been vital to the festival, and we depend on close counselors to maintain these creative relationships. Enter Eric Johnson, a talented sound and post-production professional who believes deeply in our field and in Full Frame. I have known Eric for many years, first through my work in film and television, and then later when he intervened at Full Frame more than a decade ago at my first festival as director, just three months into the job. An important piece of equipment failed, and the most dependable person I knew I could trust was Eric. He saved the day, and that was the beginning of his longstanding collaboration with the festival. For his dedication to nonfiction film and to Full Frame, we gratefully present the 2021 Full Frame Advocate Award to him.

In his “day job,” Eric is Senior Vice President of Sound and Engagement at Trailblazer Studios, one of the largest post-production companies in North Carolina. Trailblazer has worked on a number of projects that have screened at Full Frame as well as other festivals, including Sundance, Tribeca, Berlin, and the American Black Film Festival, and aired on PBS, HBO, Discovery Channel/TLC, National Geographic, Amazon, Smithsonian Channel, and Netflix.

Eric also serves on the Southern Documentary Fund Board of Directors, bridging our organizations. He was appointed to the Governor’s Advisory Council for Film, Television, and Digital Streaming and hopes to help establish North Carolina as a major production hub. “It’s exciting to see the increased interest in documentary films,” he says, “thanks to the increased availability of theatrically released films and the growing number of streaming platforms and network programming. The Full Frame Documentary Film Festival has been my primary portal into this amazing world over the last 20+ years and I’m honored that the Full Frame team feels I have contributed in at least some small way to this medium and community I love so much.”

Eric’s work with our School of Doc program, in particular, makes him a clear choice for this year’s Advocate Award. Trailblazer Studios hosts an in-depth field trip each summer for our School of Doc students, and Trailblazer’s internship program, which Eric helps coordinate, has been a launching pad for some of our most talented and ambitious teens. Eric also mentors each School of Doc student who is awarded our scholarship to attend UNC’s School of the Arts Summer Film Intensive. These students often come from different backgrounds than the other teens they encounter at the intensive. Eric’s wise counsel, and his experience as one of the few African Americans working at the top of his field, provides professional support to these students as they navigate complex social and cultural dynamics on a college campus. In this role, Eric emphasizes inclusion versus competition, encouraging students to work in collaborative ways that will benefit them in the professional film world.

Above all, Eric’s kindness, ethos, and unbridled enthusiasm for Full Frame and documentary film make him the ideal recipient of this honor, representing what our Advocate Award stands for: a true friend and a seasoned, selfless supporter of the festival and the game-changing documentary pursuits we all work to sustain.