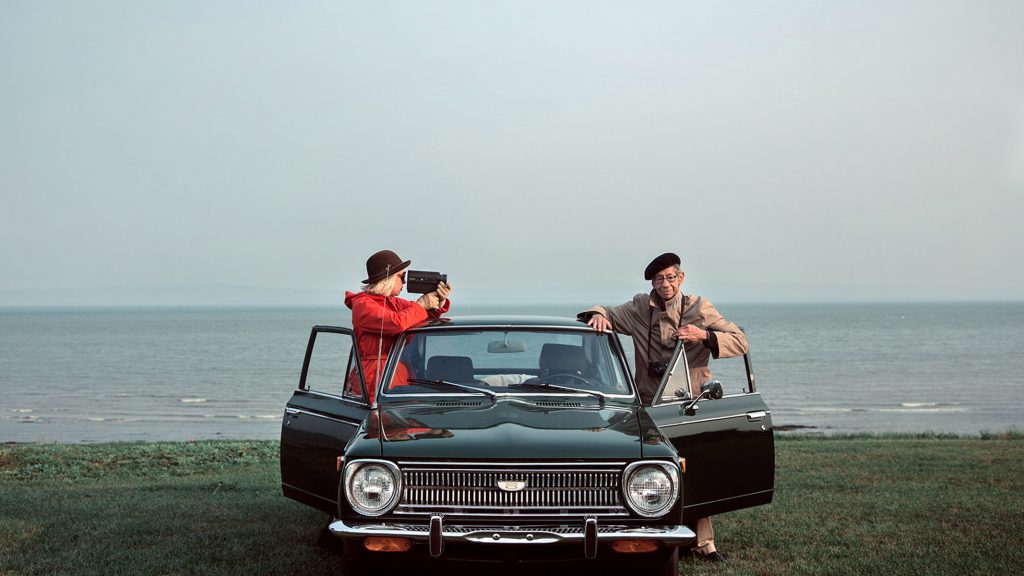 Thirty films will screen as part of NEW DOCS and are eligible for juried cash awards. Award winners will be announced during the festival on April 9. The Invited Program includes seven feature films screening out of competition.

“It is an honor to present these 37 films at our 25th annual festival,” said interim festival director and artistic director Sadie Tillery. “I am humbled by the range of experiences revealed on screen—the palpable tenderness, violence, pain, strength, vulnerability, and resolve witnessed in these works. And I am equally moved by the commitment and artistry displayed by the filmmakers, who have realized these stories in truly remarkable ways.”

This year’s festival takes place entirely online and includes Filmmaker Q&As, presented by Showtime, in addition to film screenings. Passes are on sale now at store.fullframefest.org. Single tickets to individual films will be available for purchase on Tuesday, March 29, at 11 a.m. (ET).

While the four-day festival will take place exclusively online, organizers plan to present in-person programming in downtown Durham later this summer. Three outdoor screenings are currently scheduled to take place at Durham Central Park on August 1, August 15, and August 29. Further details, including film titles, will be announced in the coming months.

Raudel lives and works in a ship-breaking yard in the west of Cuba. Haunted by a strange childhood memory, he is on the lookout for ghostly presences.

After Sherman is a story about inheritance and the tensions that define our collective American history. The director’s exploration of coastal South Carolina—as a site of pride and racial trauma—through Gullah cultural retention and land preservation is interrupted by the shootings at Mother Emanuel AME Church in Charleston, South Carolina.

Following the preventable deaths of their partners due to childbirth complications, two bereaved fathers galvanize activists, birth-workers and physicians to reckon with one of the most pressing American crises of our time—the U.S. maternal health crisis.

Anastasia Ebel, owner of the BABYBANGZ hair salon in Mid-City, New Orleans, reflects on her continuing desire to cultivate spaces of intentional reflection for both herself and her New Orleans community.

The story of Chernobyl, told entirely through a newly discovered hoard of dramatic footage filmed at the nuclear plant during the disaster and new, deeply personal audio interviews with those who were there. The film shows how Chernobyl and the subsequent cover-up sparked unprecedented distrust of the authorities, which would eventually lead to the collapse of the Soviet Union. U.S. Premiere

An animated documentary about a devoted caretaker, her chronically ill husband, and the power of undying love.

Kathryn’s ALS has left her paralyzed and her family’s relationships in tatters, but she holds on to see her daughter’s wedding. With dark humor and extraordinary intimacy, this film probes the breakdown of a family’s bonds and of a woman’s will to live.

In the midst of the Covid-19 pandemic, Steeve Day has been suffering from ALS for eight years and decides to call for assistance in dying. At the same time, however, visits to hospitals are suspended. Steeve then rents a hotel room in which to spend his last days and receive his loved ones. U.S. Premiere

Princeville, North Carolina, is the first town incorporated by freed, formerly enslaved Africans in America. This historical site sits on a precipice: It is gradually being washed away. World Premiere

Gabor is a quirky, feel-good portrait of Gabor Szilasi, the 94-year-old giant of Canadian contemporary photography. This uplifting immigrant story is an inspiring lesson on how to grow old with elegance and dignity. U.S. Premiere

Immersed in books since childhood, acclaimed text-based artist Kameelah Janan Rasheed is fascinated by the written word and its power to both define and destabilize how we understand the world. With a close-up style mirroring Kameelah’s own preoccupation with the fragmentary and barely legible, this film explores the artist’s expansive ideas and miniaturist process in her Brooklyn home studio.

A top-ranked elementary school in Chicago’s fastest growing neighborhood is a beacon for Black children until gentrification threatens its closure: When an effort emerges to transform the National Teachers Academy into a high school benefitting the neighborhood’s wealthier residents, parents, students, and educators fight to save their beloved school.

This film is an intimate, thought-provoking exploration of the journeys taken by Sara Cunningham and Kimberly Shappley, two “mama bears”—conservative, Christian mothers whose profound love for their LGBTQ+ children has turned them into fierce advocates for the entire queer community—and Tammi Terrell Morris, a young African American lesbian whose struggle for self-acceptance exemplifies why the mama bears are so vitally important.

She was once as famous as Jackie O, and then she tried to take down a president. Martha Mitchell was the unlikeliest of whistleblowers: a Republican wife who was discredited by Nixon to keep her quiet. Until now.

After Tim’s work-related stroke leads to troubling signs of memory loss, his son Michael returns home to Montana. As they spend time together, the most since Michael’s childhood, they reckon with the past that haunts Tim. Meantime is a deeply personal exploration of memory, guilt, labor, and the attempt to preserve the fleeting.

Doris Muñoz is an ambitious young music manager whose undocumented family depends on her ability to launch pop stars. When she loses her biggest client, Doris hustles to discover new talent and finds Jacks—another daughter of immigrants for whom “making it” isn’t just a dream, it’s a necessity.

At 27, Kelsey Peterson, the film’s co-director, dove into Lake Superior and emerged paralyzed. Now, the former dancer has an opportunity to dance again but is grappling with a decision to participate in a cutting-edge clinical trial, which forces her to confront hope and acceptance, body and spirit. World Premiere

When a mother of ten returns each night to the old family home to feed stray cats, her son questions the connection of these visits to the death of his brother.

A first-generation Latinx father journeys through unceded lands in the border regions between the U.S. and Mexico in search of the place where Óscar Alberto Martínez Ramírez and his young daughter, Angie Valeria, drowned.

The Panola Project chronicles the journey of Dorothy Oliver to get the people of her small town of Panola, Alabama, vaccinated. Nearly 99 percent of Panola’s adults have now received the shot in a state with one of the lowest vaccination rates in the U.S. The film illuminates how an often-overlooked rural Black community comes together in creative ways to survive.

In 1945, the U.S. firebombed Tokyo, destroying a quarter of the city and killing 100,000 people. Now, in a society that is rapidly forgetting, three elderly survivors fight to leave behind a public record of their experiences. Paper City explores what we choose to remember, and aim to forget—and the consequences of those choices.

Famous fantasy author Pierre Dubois and his wife, Aline, talk about the loss of their teenage daughter, Melanie, who committed suicide after a heartbreak.

Ahmet, a champion boxer with Turkish roots and a professional soldier in the Austrian army, starts taking acting lessons. Onstage, he comes face to face with his own internal battles. North American Premiere

When a network of Brazilian farmers seizes an area of protected Indigenous territory, a young Indigenous leader and his mentor must find new ways to fight back.

Filmed decades apart on the same miniDV camcorder, To Know Her is a poetic exploration of a family’s relationship with the filmmaker’s mother.

Each week, scores of people visit the Brooklyn Public Library to see their incarcerated loved ones via free video calls. Video Visit tells the story of two mothers and their sons, as well as the librarians who negotiate daily to keep the families connected.

Filmed entirely inside a VR world, this vérité documentary captures the excitement and surprising intimacy of a burgeoning cultural movement, demonstrating the power of online connection in an isolated world.

After a lifetime of bus rides to the U.S. to visit his children, Julián quietly starts building a house in rural Mexico. In filming his work, his granddaughter crafts a personal and poetic love letter to him and his homeland.

Filmed on the Qualla Boundary and Cherokee Nation, ᎤᏕᏲᏅ (What They’ve Been Taught) explores expressions of reciprocity in the Cherokee world, which are brought to life through an elder and first language speaker’s story. Circling an intersection of tradition, language, and land, with a commitment to maintaining balance, this film was created in collaboration with independent artists from both the Cherokee Nation and the Eastern Band of Cherokee Indians.

1970: Striking workers in communist Poland are demonstrating against price increases. Violent government repression grows as the revolt intensifies. Using stop-motion animation to bring telephone recordings to life, Tomasz Wolski has composed a highly precise and prodigious film that looks at labor and rebellion from the perspective of the oppressors.

Four high school seniors in rural Louisiana are pushed to their breaking point at T.M. Landry, an unconventional school famous for sending its graduates to elite universities.

Documentarian Christine Choy tracks down three exiled dissidents from the Tiananmen Square massacre in order to find closure on a film she began shooting in 1989 but then abandoned.

Enthralling and intimate, Navalny unfolds with the pace of a thriller as it follows Russian opposition leader Alexei Navalny in his quest to identify the men who poisoned him in August 2020. Offering extraordinary access to the investigation, the film is also a study of Navalny the man—a leader intent on reform who will not be cowed by anything.

Skate Dreams, the first feature documentary about the rise of women’s skateboarding, profiles a group of women whose pursuit of self-expression, equality, and freedom have created an international movement of independence and empowerment.

The only thing mightier than Lena Mae Perry’s electrifying voice is her faith. She’s spent the last 50 years as the steadfast bandleader of The Branchettes, a legendary North Carolina gospel group. This spirited celebration invites audiences into “Mother” Perry’s close-knit community as the 82-year-old strives to extend The Branchettes’ sacred song ministry ever forward.

Director Yaara Bou Melhem’s Unseen Skies explores the evolution of state and corporate surveillance. Her docu-journey follows celebrated visionary artist Trevor Paglen on one of his most audacious projects to date—the launching of an artwork into space to show that our skies are more than the exclusive playground of the military-industrial complex.

The Full Frame Documentary Film Festival is an internationally recognized, Academy Award–qualifying event that proudly presents the best of nonfiction films on the festival circuit each year. Based in Durham, North Carolina, the annual festival gathers thousands of enthusiastic fans from around the globe to celebrate the documentary art form, engage in meaningful conversation, and experience the impact of exceptional nonfiction cinema firsthand. The 25th Annual Full Frame Documentary Film Festival takes place virtually April 7–10, 2022.

The festival is a program of the Center for Documentary Studies, a nonprofit 501(c)(3) affiliated with Duke University, and receives support from corporate sponsors, private foundations, and individual donors whose generosity provides the foundation that makes the event possible. The Presenting Sponsor of the festival is Duke University. To learn more about the mission of Full Frame or how to support Full Frame, visit fullframefest.org.