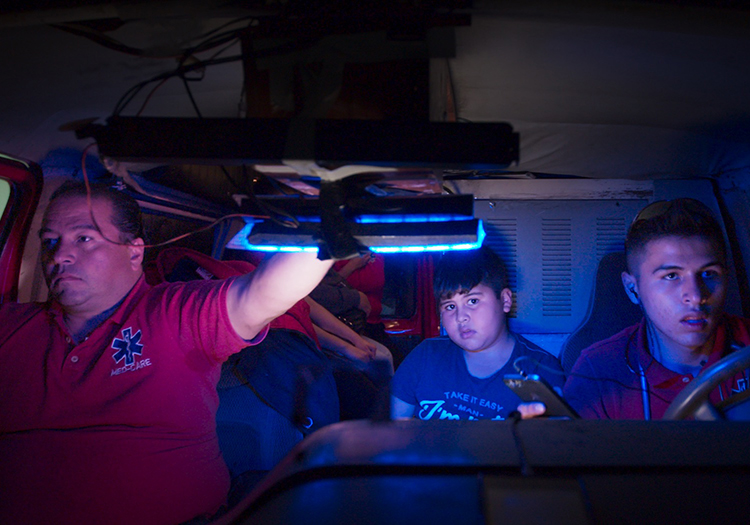 “A deft mix of big-picture doc-making and intimate moments… not to mention a wild—and remarkably eye-opening—ride.”
– David Fear, Rolling Stone

In Mexico City the Ochoas run a family-owned ambulance service, one of many private paramedic outfits addressing the massive civic void left when there are just 45 municipal ambulances serving a population that tops 9 million. Living in circumstances only slightly less dire than those of the victims they treat and transport, the Ochoa family nightly faces the spectrums of urgency and boredom, honor and corruption, life and death—all with admirable resolve. Teenage Juan captivates as he helms the family’s ambulance, with his father, uncle, and younger brother rounding out the band of nocturnal rescuers who careen through Mexico City’s neon-noir streets evading dense traffic, competing paramedics, and dubious police. In director Luke Lorentzen’s bold and balletic vérité treatment, action, drama, humor, and pathos fill the screen while an ominous microcosm of health care and humanity plays out in stark relief. A suspenseful and vivid tale of subsistence, Midnight Family refers not only to the Ochoas but to the enduring community of, and connections among, those living and dying in the dark.

This event is free, but RSVPs are recommended. Screenings can reach capacity and RSVPs will prioritize admittance.

This event is part of the Full Frame Road Show Series and is presented by American Tobacco Campus and Capitol Broadcasting Company, Inc.