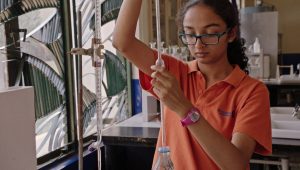 Rocky Mount, NC – As part of its Common Ground series, the Full Frame Documentary Film Festival will partner with Rocky Mount Mills to present the internationally acclaimed documentary Inventing Tomorrow. The film follows six young scientists from around the world as they tackle some of the most complex environmental issues facing humanity today. Inventing Tomorrow has been featured in several educational publications for its connection to high school STEM education. The film premiered at the 2018 Sundance Film Festival and also screened at the 2018 Full Frame Documentary Film Festival in Durham, NC.

The free screening will take place on June 13, 2019 at the Power House at Rocky Mount Mills in Rocky Mount, NC. Doors open at 6:30 pm and the film will start at 7 pm. There will also be a post-film discussion with Goodnight Scholar, Britanya Wright. The screening is free and open to the public, however RSVPs are recommended and can be made on Eventbrite.

In partnership with Full Frame, the North Carolina Arts Council, and local arts organizations, Common Ground is a traveling program that facilitates free documentary screenings and discussions in small towns throughout North Carolina. The inaugural Common Ground presentation was a successful screening of Won’t You Be My Neighbor at the Joy Performance Center in Kings Mountain, NC in October 2018. \

The world’s largest high school science competition takes place in Los Angeles. Each year, the Intel International Science and Engineering Fair invites some 1,800 finalists who come together to compete but also to connect with their peers from around the globe. This inspiring film follows six participants from Indonesia, India, Mexico, and Hawaii. Spending time with them at home before the competition, it’s clear that their research is personal. Each competitor’s project revolves around environmental issues in their community, with challenges like foaming toxic lakes and arsenic contamination. These are significant and complicated problems to solve, but the students’ innovative inventions may just hold the answers. The competition itself is a sight to behold: the scale of the event, the incredibly talented pool of participants, and of course, the anxious preparations leading up to their final presentations to the judges. These moments are not without excitement, but the film is not really about winning. When these brilliant young minds consider our collective future, we’ve all already won. 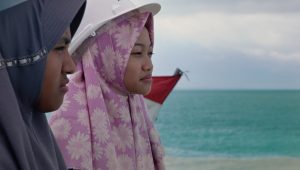