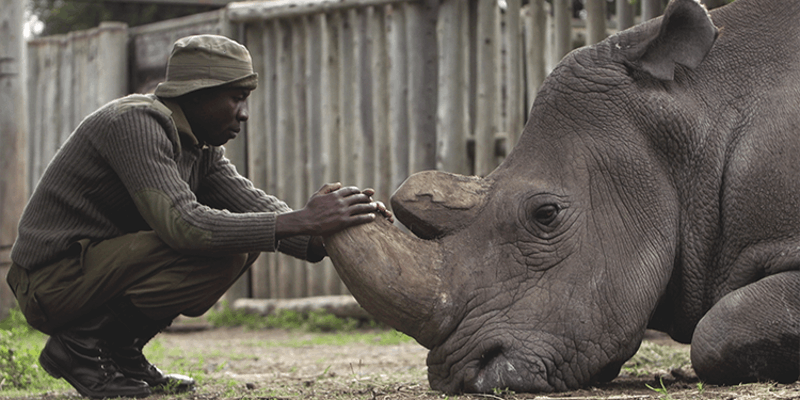 The screening will be held on October 24, 2019 at 7 pm at The Don Gibson Theatre in Shelby, NC. Free RSVPs are now available on Eventbrite.

As part of its Common Ground series, the Full Frame Documentary Film Festival will partner with the Cleveland County Arts Council and Gardner-Webb University Life of the Scholar Program to present the award-winning documentary Kifaru. The film follows a dedicated team of rangers in Kenya who are watching over Sudan, the world’s last male northern white rhino. Rampant poaching has decimated his subspecies, yet hope remains thanks to his incredible caregivers who are set on both preventing and recovering loss. Kifaru was the winner of the Environmental Award and Audience Award for best feature-length documentary at the 2019 Full Frame Documentary Film Festival.

The free screening will take place on Thursday, October 24, 2019 at The Don Gibson Theatre in Shelby, NC. Doors open at 6:30 pm and the film will start at 7:00 pm. There will also be a post-film discussion with Kifaru producer, Andrew Harrison Brown. The screening is free and open to the public, however RSVPs are recommended and can be made on Eventbrite.

In partnership with Full Frame Documentary Film Festival and local arts organizations, Common Ground is a traveling program that facilitates free documentary screenings and discussions in small towns throughout North Carolina. The inaugural Common Ground presentation was a free screening of Won’t You Be My Neighbor? at the Joy Performance Center in Kings Mountain, NC in October 2018 and in June, we presented a free screening of Inventing Tomorrow at the Power House at Rocky Mount Mills in Rocky Mount, NC.